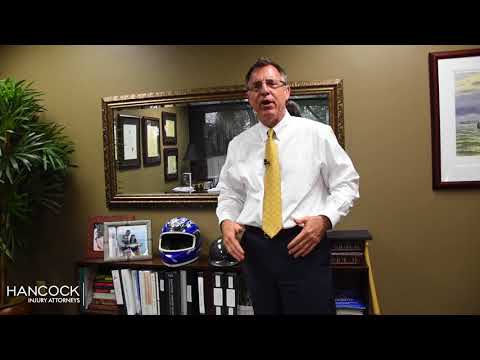 Hi, I’m Mike Hancock of Hancock Injury Attorneys and we’re standing in my office today. Over on my credenza we have three helmets. Most of my clients that come in for an initial consultation end up asking me by the end of the consultation if I ride motorcycles.

I always have to tell them no, these are helmets are from a number of my clients who have had a number of motorcycle accidents and I’ve used these helmets as evidence in their cases. And I also keep their helmets on my credenza as a reminder of who I represent.

And this is the story today of this one helmet; the story behind the white helmet. This gentleman typifies the type of case that I see with motorcycle accidents. This gentleman was one of my favorite clients. He was 38 years old at the time of this accident. A member of the armed forces, worked out at Cent-Com in computers and was the most responsible rider and person he could be. Why I say it typifies most motorcycle accidents is my client was riding his motorcycle along Highway 301 and someone pulled out from a side business, directly in front of my client and just did not see my client at all. And it happened in such a way that he had no opportunity to avoid the accident. And essentially, he t-boned the side of her car at about 45 mph, hit the side of the car, went up over the car, suffered a lot of serious orthopedic injuries including a crushed elbow, broken pelvis, numerous internal injuries, a broken femur, and other injuries.

And one of the things that typifies this accident is what I’ve seen in my experience is that no matter how careful of a rider you are, no matter how much experience you have, sometimes you have no way to avoid an accident just because of the way someone might pull out right at the last second in front of you. And that is one of the most common type of collisions we see in motorcycle accidents where someone turns left directly in front of you or out of a side business onto a street directly in front of you. For whatever reasons, people just fail to see motorcycles as they are coming down the road. What I really remember about my client and this helmet every time I see it and talk about it is despite his serious orthopedic injuries, the type of help we were about to provide my client.

He was almost retired from the military. He was about 18 ½ years into his military career. He was in the Navy and was trying to retire at 20 years. Due to his disabilities from this accident, he was in jeopardy of being forced to retire prior to his 20 years, which would have prevented him from a lot of the benefits of retiring at 20 years. We were able to assist him in getting through to that 20 years so that he retired with full benefits and we were able to settle his case for enough money to not only pay for all his numerous medical bills but to also make sure he had money for his family for future medical bills that he is definitely going to incur

And what I also remember about this client that even after 6 months or so he was only able to straighten his elbow to about this point, he had such a positive attitude, that was a great thing for him. He was excited that he could extend his arm out that far and he just had such a great attitude. I will always remember that is that even though all the bad things that happened to him, his attitude was “I am alive, I’m with my family, and I can still enjoy my life.”

So that is the story behind the white helmet.