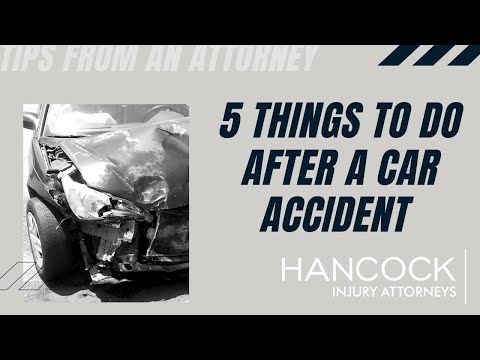 Hi, I’m Mike Hancock, and today I want to share with you the five most important things you can do for yourself after being involved in a car accident. First and foremost, immediately call 911. In my experience, the investigating police agency, whether that’s a city police, county sheriff’s office, or Florida highway patrol, will be out there within minutes, but sometimes it takes forty-five minutes to an hour for Florida highway patrol to arrive on scene. What you should do, if possible before the police arrive, if it’s safe to do so, get out of your vehicle, go off to the side of the road, and if possible, talk to the other driver who caused the accident and actually ask them why they ran into you. It’s a simple question, and many times I have seen my clients come to me and say “I actually asked them; “Why did you rear end me?,” “Why didn’t you stop in time?,”” and immediately after the accident, before their guard is up, they often admit exactly why they ran into you. “I was- my phone dropped on the floor,” “I was- my phone had just rang and I was looking to answer the phone,” “I was changing the station on the radio,” “I was lighting a cigarette,” any number of things that will help us prove the negligence of the person involved. After that, the next thing you need to do is take photos of the damage to the vehicles. So when I talk about taking photos to the damage to your vehicle, I’m also talking about taking photos, not only just of your car, but of the other person’s car that ran into you. Oftentimes, the damage to the vehicles are not very equal. I’ve had a number of times where the damage to the rear end of my client’s vehicle does not show very much damage, but the damage to the front end of the vehicle that rear ended them shows significant damage, and so just taking a photo of the rear end of your car doesn’t do much good- you know- versus taking photos of the damage to the front end of the other vehicle. And in addition to taking the photos of the damage to the vehicle, not only take photos that are close up, but more broad view of the vehicles. Take video, everybody has cell phones, and those cell phones will allow you to take photos, it will allow you to take videos. You can take a video and kind of just narrate what happened. If you are comfortable with this, one of the most effective things I have ever seen my client do is actually take a video of the other driver and ask them “Why they just rear ended me?,” and sometimes- you know- the other driver will say “I don’t want to say anything,” and other times, you’ll get extremely valuable information. The other thing to do is if there was anybody else who stopped and rendered aid, get their names and contact information. So you want the names and contact information of anybody, any witness, whether they were witness to the accident itself, or anybody who came and rendered aid to anybody involved in the accident. Get their names and contact information. And then the fifth thing you should do is either go by ambulance to the emergency room, or if you feel as if you’re injured, seek medical attention as soon as possible after the crash. I’m not suggesting that you go seek medical attention if you’re not hurt, but if you do feel that you’re hurt, I can tell you this; one of the ways that insurance companies evaluate claims is not only based off of the photographic evidence of the damage and the severity of the damage to the vehicles, but they also evaluate claims as to whether or not you went to the hospital by ambulance or whether you didn’t go seek any attention from a medical provider until a week later, and they think much more of a case in the terms of their monetary evaluation of that case from someone who’s been taken away from the scene in an ambulance versus someone who didn’t seek any medical treatment for a week or two afterwards. So if you do feel hurt, the sooner you go seek medical attention, the better, and those are the five most important things you can do for yourself to maximize the value of your car accident and claim after being involved in some type of car accident. If you have any other questions you want to discuss with me about a recent car accident you’ve been involved in, give me a call, I’ll be happy to get on the phone with you or also visit other parts of our website at Hancock Injury Attorneys.com for more answers to frequently asked questions regarding your car accident.