Guide to Gasparilla 2020: Part One

Gasparilla 2020 is underway in Tampa Bay! Saturday, January 25 will be the invasion and the day parade. We want to give you all the facts about the parade, so you can plan ahead and have a fun, safe day.

The “Invasion” of Jose Gasparilla

The Jose Gasparilla Pirate Ship sets sail at the south end of Hillsborough Bay at 11:30 a.m., sails north to Seddon Channel (between Davis Island and Harbour Island), continues north and docks at the Tampa Convention Center at 1:00 p.m when the Mayor will surrender the Key to the City of Tampa into the hands of the Captain of Ye Mystic Krewe of Gasparilla. This is free to watch from many places around South Tampa, including Harbour Island, Davis Island and downtown.

The Parade of Pirates

What Can and Can’t I Bring?

DO bring money. There are ATMs located along the parade route. All food vendors take cash only.

DO ride a bike, but remember that within the event street closures, cyclists must walk with their bikes. Don’t leave your bicycle unattended and do not lock to private or city property.

DO call theGasparilla Ticket office in Tampa813-251-8844 if you lose something at the parade to see if they have it.

DON’T Bring Coolers. Coolers, besides soft ones for medical or child needs, are prohibited. There will be beer and wine for sale and can be purchased at one of several Gasparilla Charity Beer Gardens located throughout the event. You must be 21+ and you must present a valid photo ID. 100% of the net revenue supports local Tampa Bay area charities.

DON’T cross the parade route unless you have reserved parade seating. You may be allowed to cross Bayshore at Reserved Parade Seating gates and ONLY when there is a break in the parade lineup as permitted by the gate security officer. Gate security will escort guests across the street ONLY when allowed by officers. (Arrive Early!)

DON’T bring any pets other than service animals.

DON’T bring any of this:

DON’T have an open container unless you are in a designated wet zone (Along the Parade Route): 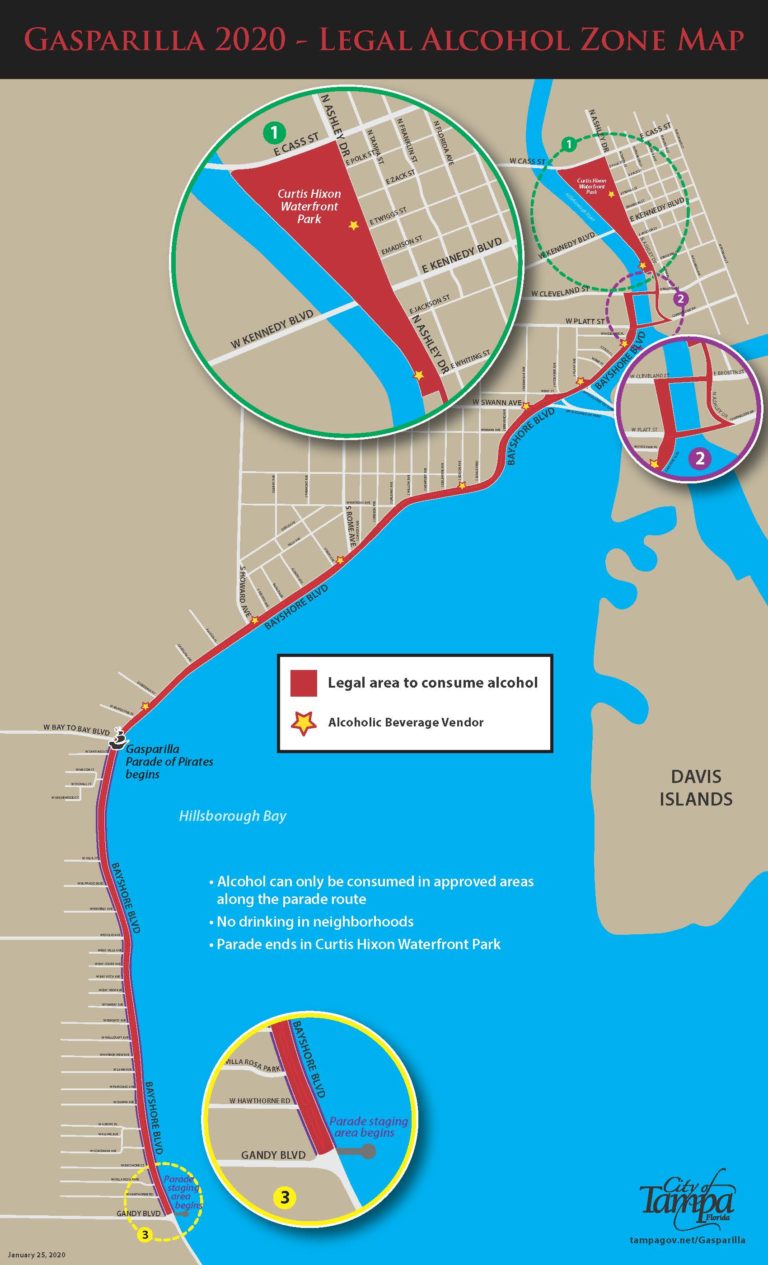 The waterside of the parade route will remain open to the neighborhood and public between Howard and Gunby and street crossings at Howard, Desoto, Nance, Albany and Gunby will be open for public access to the waterside route on a first come first serve basis. Police will monitor the area as it fills.

We hope you have a fun and safe time at Gasparilla 2020!