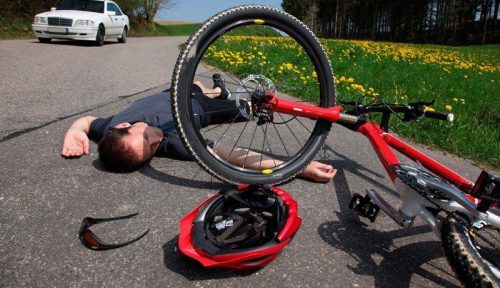 The main safety goal when bicycling is to avoid getting hit by a car. Car and bike accidents usually occur as a car pulls out of a side street, parking lot or driveway directly into the path of the biker. Accidents also commonly occur when a cyclist stops at a red light. After the light turns green, the cyclist goes forward and is hit by a car that is turning right. Cyclists can avoid this scenario by stopping behind cars instead of to the right of them.

Bicyclists are advised to make themselves as visible as possible to avoid colliding with cars. Some advise using a flag attached to the bike or catching the eyes of nearby car drivers before going through intersections. A bell or other noise making device mounted to the bike may also helpful when cycling near people or drivers who have their car windows down.

A headlight is the easiest and most effective way to create better visibility. A front headlight is required at night but, for daytime, a bright, flashing will help cyclists be more visible to drivers. LED headlights are a good choice for daytime biking; they last ten times as long as older style lights. Headlamps are another ideal choice and can be mounted directly on the cyclist’s head or helmet. Headlamps allow cyclists to look directly at drivers and make sure they are seen.

Another common type of bicycle accident occurs when a driver opens a door directly in front of a cyclist. The biker may wish to ride far enough to the left to avoid such a collision but risk being hit from behind by other drivers.

Finally, some general safety tips to keep in mind are to avoid busy streets, use arm signals, and avoid using headphones and cellphones while biking. Keeping these bicycle safety tips in mind will help reduce preventable accidents.

Source: Bicycle Safety, “How to Not Get Hit by Cars”